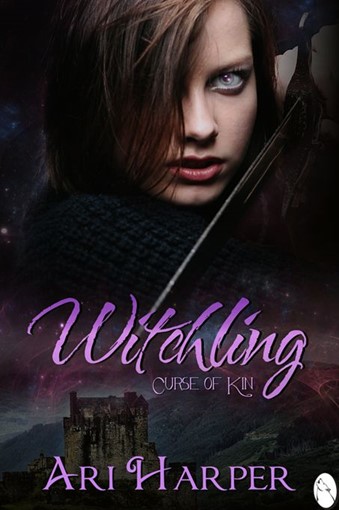 Formats Available In: All eBook formats

Blurb: Nera is a normal teenage girl living in Ireland, or so she thought until she discovers the family secret.. now her world is forever changed.

Descended from a long line of witches, she discovers is the one who has to stop the curse that has taken the life of every girl before her.

And if that isn’t enough, she must learn to use magic from the man called Bones. He is the son of Mari, Queen of the Witches…and a god. It is Bones who has been entrusted to teach her the skills she needs to stay alive, which wouldn’t be so bad if he didn’t have an uncanny knack for pushing her buttons.

Can Nera succeed and resist the charms of the man who gets under her skin at every opportunity?

“Witches did and still do exist. You know that wherever there is good there must also be evil to balance it out.” He paused, took a deep breath, then continued. “That can take many forms, witches only being one of them. Not all witches are evil obviously, but Edrith O’Reilly was very evil. When Pria planned to elope with Edrith’s youngest son, she placed a curse on them. She cursed me, and she cursed her own son. I know this is a lot to take in, Nera, but what I have told you is true. That is exactly what happened.”

“Come on, Jasper. You really don’t expect me, us, to believe this, do you?” It couldn’t be true, yet parts of his story were settling into my heart and mind already, as if the words had been waiting to find a resting place within me.

“Yes, girl dear, I do,” Jasper replied, gazing at me. “How did your daughter die, Jasper?” Sully asked, obviously remembering the other dream that I had constantly.

“Edrith slit her throat with a sword, Sully.”

I felt the bile rise in my own throat and pressed my hand to my mouth in an effort to stop it. Breathe, I told myself, just breathe. I squeezed my eyes tight and fought for control. I could feel a hand on my knee, and when I looked up, Jasper was kneeling on the floor in front of me, his gaze full of pain.

“Was that the other dream you were having?” His beautiful blue eyes were shadowed and troubled.

I nodded my head. The words stuck in my mind, the bile forcing its way up my throat. I pushed past him and ran for the downstairs bathroom in the hallway. I leaned over and retched into the bowl. I gripped onto the sides to stop myself from collapsing to the floor. My knees had gone weak, and cold sweat was running down my face. I couldn’t control the shaking and was past caring. Neither my body nor my mind could accept what I had heard. It wasn’t possible. How could it be that Jasper is 800 years old and I am reliving his daughter’s death on a nightly basis? No, it is not possible.

There was a light tap on the door, and Brie tiptoed in with a damp cloth in her hands. Her mouth was set into a grim line. She watched me as I struggled to stand and then handed me the cloth. I leaned against the basin, unsteady on my feet. I wiped my face and hands and looked up at her, my gaze searching her face for any trace of sympathy.

“I’m really going crazy, aren’t I?” I hung my head, suddenly not wanting to see the pity in her eyes.

“I don’t think you are,” she replied, her voice gentle. She ran her hand down my arm before I pulled away. “I think what Jasper is saying is true. Why don’t you come back into the library and we can discuss it more.”

“You’re kidding, right,” I scoffed at her, ignoring the shocked look on her face. “You don’t seriously believe this stuff. Does he look that old to you?” I leaned on the basin until the ground stopped moving under my feet.

“No, he doesn’t.” Brie brushed her hair back from her face and then licked her lips at the reflection in the mirror over my shoulder. “But he said that was part of the curse, Nera. Just listen to him before you decide you’re crazy and he is lying.”

“Whatever.” I threw the cloth into the sink and pushed past her out of the bathroom.

Jasper and Sully looked up when I stalked back into the room. Brie followed me and hurried to sit with Sully on the couch. I opted to stand beside the fireplace, my arms folded.

“I don’t believe you,” I said, knowing that with the hitch in my voice I didn’t sound convincing. I was acting like a petulant bitch, but I couldn’t help it. The way the day was shaping up called for my worst side to come out and play and I really didn’t care.

“Before you make up your mind, there’s more, Nera.” He pursed his lips, then continued. “When there is a curse, there is always a way out of that curse. Each third generation since that time has had one female child that has the ability to break the spell. Not all have had the faith in themselves or believed in me enough to do so. Maybe their connection wasn’t close enough,” he shrugged. “I don’t really know. But you are third generation. You are stronger than any other female that has come forward. Because of who you are, Nera, you are the one.”

Jasper watched me closely while I tried to process the information that he had given me. I nibbled on my bottom lip and pulled at my hair. “What are you trying to tell me?” I asked him.

“When you were born, I knew who you were.” A small smile hovered on his lips. “You were born with a caul, a part of the birthing membrane, on your head, and that makes you a Caulbearer, girl dear. In the world of magic, this marks the child as unique and powerful, usually with psychic gifts, like second sight and the ability to soul journey. But we can talk about that later.”

“Does that mean Nera is a witch?” Brie asked, her eyes wide as she looked at me, her face lighting up.

“I guess that depends on your definition of a witch,” Jasper replied. “I believe there are people in this world who have special abilities. Some call themselves witches, some don’t. It’s just the way you perceive something, I suppose.”

“So what does she have to do with the whole curse thing, then?” Sully asked.

Jasper’s gazed met mine before he answered. “She is the one that can stop the curse and let me die.”

“Are you crazy, Jasper? How can you even think I would let you die?” I jumped to my feet, the horror of what he was saying slamming into me. I paused for a breath, the fear gripping my chest like a vice which made such a simple task difficult. It was too much for me. I turned and fled to the kitchen and threw open the door to the garden. I gulped down a breath of cool air and lurched over to a grassy patch and sank to the ground. Hugo walked over to me and licked my hand before sitting down in front of me, his soulful brown gaze on my face.

“Oh, Hugo, what is going on?” I cried, pushing my face into his fur. Cradling his head in my arms for comfort, I leaned against his huge body. I felt movement, and Brie and Sully sat down beside me. They reached out and wrapped their arms around me. Most of what Jasper had told us was hard to believe, but what if it was true? Parts of my brain screamed at me that it was possible, but parts still balked at the idea of witches, gods, and demons—especially so close to someone I loved.

“Do you believe what Jasper said?” Sully leaned forward. He picked a blade of grass and ran it through his fingers before looking at me again.”Do you think it could be possible?”

“I really don’t know.” I sighed, rubbing the back of my hand over my face. “It seems so farfetched.”

“But it could be true.” Brie leaned her chin on my shoulder. “What if you really are what he says you are? I’ve always said there was something special about you. Everyone thinks so, not just Sully and me.”

“Yeah, Connor thinks I’m special, so special he wants to grope me every time he sees me,” I scoffed.

“Stop being so pigheaded. You know you have something that no one else has. Do you really think we would hang out with you if you were normal?” Brie joked. Her smile faded quickly when I looked at her, and she pulled away from me.

“I know you are trying to make me feel better, and I do appreciate it, I really do. But if this is even halfway true… It’s so much to take in.” Just pull yourself together, girl. This is getting you nowhere, tears over, deal with it.

To offset the limitations of growing old ungracefully, she created her own set of unique worlds where she can be and do whatever she wants. God, demons and witches surround Ari while she spins her magic, mainly doing what they tell her to do.

She likes to work amongst chaos when given a choice, which is good because she is generally surrounded by children, all clamoring for attention. Some of them end up in her stories, some of them even get to die grisly deaths or be cast away to another realm.

Her favorite pet is a big black Labrador, Hugo. He stars as himself in the Curse of Kin series as Nera’s faithful hound.