Reminder of  our ‘homework’:

At the time of ‘Putting this Newsletter to Bed’, as they say, we had 15 Members who had registered. Sign up Here 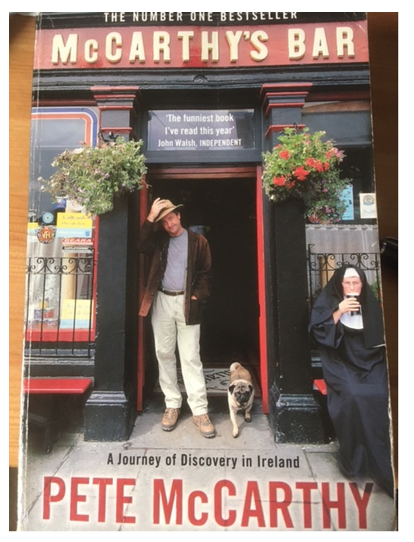 Having just received my Irish passport courtesy of my mother having been born in Mitchell’s Town, County Cork, I was interested to read this story of a journey through Southern Ireland. Pete McCarthy was born to an Irish mother and English father he is a writer and performer. This is his first book.

The eighth rule of travel is: ‘never pass a bar that has your name on it, among others such as the seventh rule: never eat in a restaurant with laminated menus.’

Pete takes us on a journey from village to village in Southern Island exposing the underbelly. During the journey he meets many different nationalities, some travelling, some who have settled in the Irish republic and of course lots of locals . He writes flippantly at times but also entwines descriptions of the people, landscape, and quirks of the republic. From ‘Faeiries’ to The Children of

Lir (Children condemned by their jealous stepmother to be Swans for 300 years  on the cold waters of Lake darva, 300 years on the Sea of Moyle and a final 300 years on the grey Atalantic). Their final landing spot marked by stones. He can be forgiven for the sometimes, brazen outpourings for instance, Rule Number 17: Never try and score dope from Hassidic Jews while under the impression they are Rastafarians’, which can take one aback.

The main theme of the book is whether his draw to Ireland is hereditary, from memories of childhood there or whether it is merely an interest in the culture. Pete explores this by trying to intermingle in the ‘new’ Ireland. The contrasts between the old cottages, villages and the now ubiquitous double-glazed bungalows, EU funded roads and lanes with direction signage on which distances are questionable, illustrate the changes apparent. Backroom bars serving Guinness and sometimes Pochine, which sell household goods, farm supplies and even animals compared to the old pubs transformed into gourmet restaurants. Is the soul of Ireland being eaten up by the tourist demands?

As well as following the tourist trail, which he finds irksome, he decides to take a pilgrimage (St Patricks Purgatory). Three days of no shoes, no sleep, tiny meals (after having fasted prior) Rosary prayers all day and all night whilst on bare knees. He is not even religious. He meets many dedicated pilgrims who return year after year demonstrating the another side of Ireland.

Always questioning whether he belongs or not.

The book is sometimes hilarious, laugh out loud passages, but often sad when describing the exodus and, unfortunately, the British cruelty. It gives the Irish a voice.

I recognised a lot of its themes and, should you have an Irish background, or not, I would recommend it. 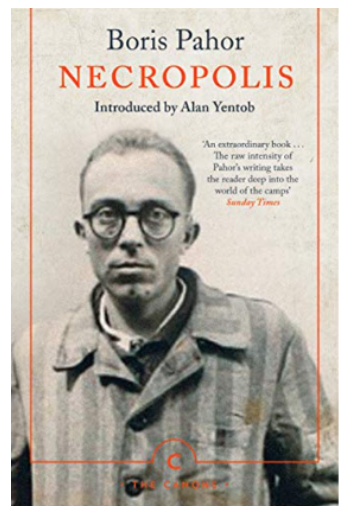 Boris Pahor writes with such honesty it’s impossible not to feel his journey. Necropolis begins on a road into the mountains, exactly where it ends. But it is the remarkable journey there, through the concentration camps at Bergen-Belsen, Harzungen, Dachau and Natzweiler-Struthof, that he takes us on, the people he introduces us to, that will keep entranced. He does not revel in torture and cruelty, of course they are there. This story written with powerful, yet simple, emotive description is a true work of literature.

Boris’s crime was being Slovenian in Italy. For this he spent fourteen months building what he calls his CV. He tells how a tiny injury, wrapped in paper bandages transformed his life., Through unusual acts of kindness, he became a medic, though he knew nothing of medicine. Today at 107, Boris Pahor is the oldest surviving victim of the Nazi camps. I recommend this book not because of the horrors but because of writing quality, this is life-writing at its best.

Members in the press.

A useful webinar from Sarah Nuttall

Let Your Characters Do The Writing

I have been on a long writing journey over the past year.  Having only written the odd poem and quite a few business simulations, I launched into a book one day on the basis of a single inspiration that came to me watching a BBC nature programme at the end of March.  The subject was fireflies, and I started wondering what it would be like if we could communicate by way of light over huge distances.  The result of that single moment is a Trilogy, which is now 2/3 “complete” and runs to almost 200,000 words.

Having never written much, and being so new to the craft, I have a few perspectives to share, which I hope might resonate for other writers, or even bring new ideas.

The Idea – They say that you only need the germ of an idea to build a book around, and I found that to be true.  When I started, I had no idea where the book was going, other than the core theme and a few principles I wanted to touch on as I got into it.  I find lockdown provides plenty of metaphor to choose from.

Plotting – I found it useful to know roughly where the story was going, so I did plot it out, but actually I found it was the characters themselves who wrote the story for me and continue to do so.  The final story bears only a passing resemblance to what I thought I was writing  Even when I put them into a carefully crafted setting, I don’t know what my characters are going to do.  Even knowing and understanding their motivations, they still catch me off guard.  When the writing flows, I’m reading the narrative for the first time, which can be a joy if I go with it, or a curse when they won’t go where I thought I wanted them to.

Characters – Somewhere I saw that you should scope out your characters in physical and emotional detail, their hopes, fears and personality.  I was a bit sceptical of the idea, but found that it gave me a real anchor point when I wasn’t sure what would happen next – You just need to ask your characters!

Technicality – The craft demands some specific rules about punctuating dialogue, that I still find elusive.  It is a work in progress for me, although it appears to come naturally to some.

Advice – There is no shortage of advice as you know, to be found on the internet.  Most of it is very good actually and, even better, it’s free.  Some of it is bewildering to a new writer, but often a second visit makes it clearer

Mindset – The editing mindset is definitely different from the writing mindset, at least for me.  I find when I’m writing that I need to be somewhat free of the rules about punctuation, sentence length, Point of View etc., and just write.  I have found that when I return the next day and start with what I call a soft edit, when read the last passage and make minor tweaks, I am connected back into the story line and ready to go.  If I start with a hard POV, punctuation or wordsmithing edit, I reach the end in the wrong headspace.

Technology – I was introduced to Scrivener early on. And have found it super for organising the work.  It means when you go off a particular story line or a character is not stimulating telling their story for you, you can write another scene and still find it again.  I don’t think I would have been able to wite without the help of this software or something  like it.  I know that others have a different experience.

Support – It is hard to be a writer without support, from family, friends, fellow writers.  I wish I had found HWC earlier, because I have discovered a community of like-minded people who took me in at once and have already been a huge support.  Sometimes support and encouragement doesn’t come from places you would expect it to.

Representation – If you want to get published rather than self-publish, an Agent is pretty much essential.  I have always seen the book as a film, and still do.  I realise I have written it somewhat in screenplay format.  A distant ambition to make the film, I am told it is nigh on impossible without a good agent.  In this I was very fortunate and my agent has supported me through the journey over many months now.  Negotiations are not always straightforward and I have found that patience here bears dividends.

The Edit – As we approach the final edit, pre-submission, there are things to let go of.  The challenge of allowing your characters to write the book for you is that they all have a point of view and thoughts of their own.  I discovered to my horror that this is “Not Allowed!”  You can’t have 50 POVs in a book. I am told, so perhaps we have to let go of a few of our babies at the end.

The Website – We must have an Author Website, ready for publishers to visit when the submission lands.  This will then become a vehicle for adoring fans 12 to find out more about us, which brings me to the hardest part of all.  Creating  a website, I found a wonderful illustrator who has brought some of my imagination to life in her images.

Social Media – The thought of publishing every tiny part of my life even to friends on Facebook, has never appealed in any sense, however, it seems that, as an author, this becomes essential.   I am now equipped with a brand new Facebook page, a Website, an Instagram and a new author Twitter account.  Learning the technology and the various linkages, hashtags, handles is hard enough, risking your privacy and putting yourself out there is another.  Generating content that you hope others might find interesting is even trickier.

I thought perhaps I would start here, hence my short introduction for the Newsletter.

Quotes from 5 authors, and one other illustrious personage

1.  ‘East is east and west is west and never the twain shall meet’.

2.  ‘A woman, especially if she have the misfortune of knowing anything, should conceal it as well as she can’.

3.  ‘Man, unlike any other thing… grows beyond his work, walks up the stairs of his concepts, emerges ahead of his accomplishments’.

5.  ‘I’ll wager you that in ten years it will be fashionable again to be a virgin’.

I am sure that many of us have been inundated with different photographs, videos and jokes during this lockdown period. Some of which are doing the rounds for the umpteenth time.

The other day I received one which could be quite relevant to our work. Some of you may well have seen these but I thought it would be worth referencing. The link is to a reading by HRH The Prince of Wales which I received. I hope that you enjoy it.

One would think that Shakespeare would be the leader in the invention of language, however, those more knowledgeable than I have advised me that there have been studies conducted:  According to Gavin Alexander, lecturer in English at Cambridge University and fellow of Milton’s alma mater, Christ’s College, who has trawled the Oxford English Dictionary (OED) for evidence, Milton is responsible for introducing some 630 words to the English language, making him the country’s greatest neologist, ahead of Ben Jonson with 558, John Donne with 342 and Shakespeare with 229. Without the great poet there would be no liturgical, debauchery, besottedly, unhealthily, padlock, dismissive, terrific, embellishing, fragrance, didactic or love-lorn. And certainly, no complacency.

Here is the full version in case you can’t hear it: